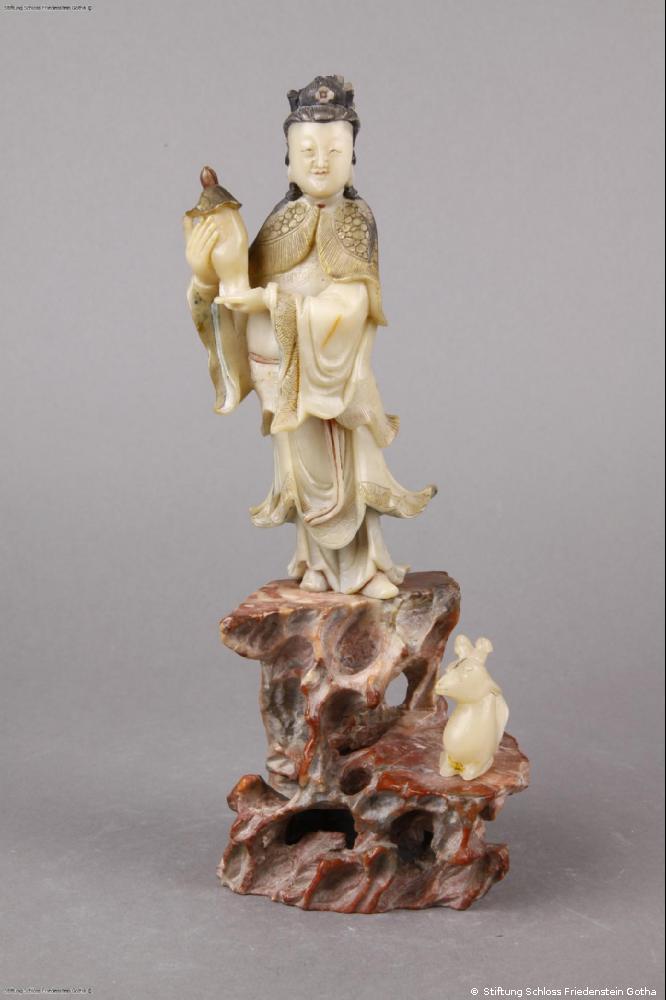 ‘… the Chinese cabinet, unequalled in Germany, perhaps in Europe’
The Gentleman’s Magazine and Chronicle, London, 1822

My first encounter with Gotha’s Chinese Cabinet was in Spring 2018. I was on a Herzog Ernst scholarship to explore early modern travel books and a colleague highly recommended a visit to the ducal museum. Walking through the spacious, light-filled halls of the ground floor, I appreciated the exhibits of the sculpture gallery. Going up to the first floor, something immediately caught my eye—a series of Chinese soapstone figures lined up behind a vitrine. Upon reading the accompanying text, I was astonished to learn that the Friedenstein Palace once housed an extensive collection of Chinese objects, known as Duke August’s Chinese Cabinet.

Contemporaneous descriptions of the Chinese Cabinet paint a picture of an extraordinary collection—in size and in scope. Located in Gotha’s Friedenstein Palace, spanning eight rooms and occupying approximately 400sqm, the Chinesisches Kabinett, filled with East Asian objects, was palatial compared to the Schatzkammern and studiolos of other aristocratic residences. The cabinet was a prized feature of Gotha and was renowned across Europe. Although collections of Chinese porcelain and lacquerware were ubiquitous throughout European aristocratic residences, Gotha’s Chinese Cabinet was much broader in scope. Duke August also collected Chinese sculptures, watercolours, books, costumes and furniture. Some of these objects have been described by contemporaries. Franz Xaver von Zach, an astronomer at the Gotha court, gives evidence about the young Prince August’s collecting efforts. He describes, for instance, a fascinating shipment with “four Chinese dolls, almost life size, with a Chinese man and a Chinese woman, a Tartar man and a Tartar woman, dressed in full costume.” Joseph Meyer, Duke August’s agent in London, sent him numerous items, including “two volumes of Chinese paintings… depicting the costumes, musical instruments, furniture, agriculture, home interiors and torture practices of this interesting people”.

Despite its nineteenth-century fame, little is heard about the Chinese Cabinet today, because it no longer exists. The rooms in which the objects were displayed have been redesigned and repurposed. The collection, once numbering over 2000 items, was largely removed from display in the palace, and assimilated under Gotha’s ducal museum in the 1870s. In the mid-twentieth century, the collection was affected by theft and the second world war. Today, a small number of objects from the Chinese Cabinet can still be viewed in Gotha’s ducal museum, which was where I made my first serendipitous encounter with the collection. Further reading, archival research and valuable conversations with the museum’s curator piqued my interest in the collection and its history.

This spring, I am excited to be back at the Gotha Research Centre to start a three-year DFG-funded research project on the Chinese Cabinet. My goal is to bring renewed attention to Gotha’s Chinese Cabinet. This involves exploring the genesis of the collection and reconstructing the Chinese cabinet through historical records. Sources such as letters between the duke and his agents, inventories and auction catalogues can uncover the global paths which these objects took from China, via London, Paris or Copenhagen, before finding their way to Gotha.

Through my research project, I will explore and retell the history about how China was collected, displayed and understood by the collector and audiences of Gotha’s Chinese Cabinet. For much of the early modern period and the long-eighteenth century, many Europeans were fascinated by descriptions of China and Chinese objects in travel texts. In their daily lives, they engaged with the concept of China by featuring China and fictional Chinese characters in their literary creations, decorating their interiors with China-inspired design and architecture, and by collecting Chinese objects. Gotha’s Chinese Cabinet as well as the numerous nineteenth-century books on China in the research library are part of a larger, connected story about the European engagement with China.